Total hectare and production of the country in the last five years are as follows.

The style of the tobacco is mostly filler; the requirement of Semi flavored and flavored is increasing. Over the last five years radical changes have taken place in crop husbandry practices which has resulted into change in the crop profile. All these changes are on account of low to medium topping and suckering, plantation on ridges with plant to plant spacing 3X2 sq feet couple with compound fertilizers application. 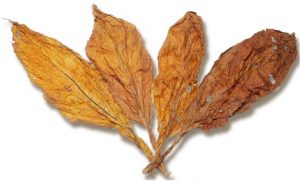 Varieties grown here in Pakistan are standard commercial varieties. These varieties are K399 , NC95 , SPEIGHT G-28 AND HYBRID . No Genetic Modified variety is allowed to be cultivated . The certified seed is being issued by the Government Agency to all tobacco industries for onwards .distribution to the farmers.

Curing and Grading system as per the international Management, The following best practices are applied in curing to achieve satisfactory results:

Basic of grading – Plant positions, ripeness & Quality. Since 2009, the grading system is changed to international system

Integrated Pest Management is being practiced by the tobacco industries to minimize dependence on Agro Chemicals etc with the following benefits.

It is a traditional variety grown here in this part of the country. Its local name is WP (white patta) while its technical name is N. Rustica . It is widely grown in India as well. This variety is short stature with 15 to 20 leave per plant which is rounded in shape. Its high nic source of tobacco which is mostly used in smokeless product (Naswar) and in low medium category cigarettes .Its major consumption is in tribal belt & Afghanistan. 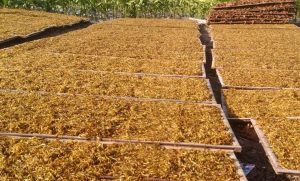 It is cured under the sun & then bulked for a week. Its grading is very simple, mostly 2 to 3 grades. The 1st quality grade is with greenish lemon color and is semi aromatic in taste; it is mostly used in Hubble & bubble. The 2nd & 3rd quality grade, the color of the leaf is dark brown to brown; leaf body is heavy with 3.5 % to 4% nic content. This style finds its way mostly in Naswar product.

The growth of this variety is at decline, and tobacco industries are not encouraging its consumption in the cigarette manufactures due to environmental and health issues. 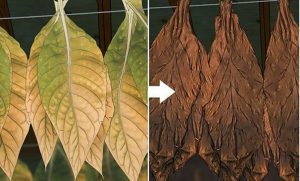 It’s a Virginia type variety, grown in central Punjab, Speight G28 & Gulpao are the two main varieties used for air curing. Its crop husbandry practices are similar to FCV, except its curing which is conducted under the shade. Its leaves are reaped and tied with wooden sticks and hanged under the shade for curing. Its dark brown mahogany color tobacco, and is used in the low medium segment brands. Its production is almost at dead end, instead the tobacco industries are encouraging the low nic & thin bodied Virginia tobacco to be sun dried rather than flue cured for cost cutting.